I was cleaning out some cardboard boxes that had lots of crap-o-la in them and putting all the crap-o-la into plastic storage bins. Well, these things didn't fit. I've had them for years and I will miss them dearly, but I think it's time to say goodbye....


To Luke and Leia. 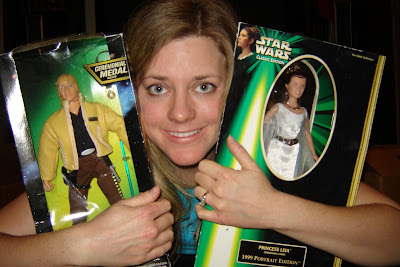 Obtained during my bout of Star Wars Freak. I'm not giving them away, just handing them off to good friend Rogue for safe keeping. 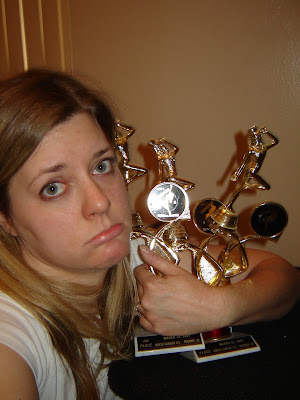 I got them for getting 1st place at a dance competition in 2001. It was a rare competition that gave every dancer a trophy instead of just one per class or even per studio. But after being advised by both good friend Rogue and my hubby, I've decided to keep them. Someday I'll show my kids that I used to be good at something. Sorta. It really wasn't that hard getting first place, especially when one of our dance numbers was the only one in its category. Automatic 1st place. he he he. Shiny trophy.

written and directed by Amy at 1:25 PM

I think Luke and Leia are an investment. So you know you'll never starve-

Seriously. Luke & Leia are probably going to be worth mucho $$. Definitely hang on to them. Kudos to you for cleaning stuff out. I REALLY need to do some of that...in every room in my house.