ONE by Leigh Ann Kopans

Indie authors get some serious props from me.
Why? 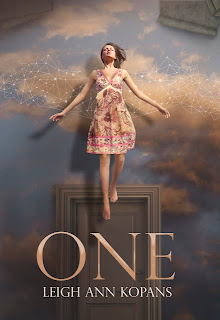 Here's a synopsis of the story:

Sixteen-year-old Merrin Grey would love to be able to fly, or even drift along like a freaking ghost - too bad all she can do is float up and down. When almost everyone else is a Super, with at least two powers, or a Normal, with none, being a One is the worst kind of in-between.

All Merrin has ever wanted is to land an internship at the Biotech Hub. She busts her butt in AP Chem and salivates over news of Hub President Fisk’s experiments, hoping she can get close enough to his research on the manifestations of superpowers to finally figure out how to fix herself.

Then she meets Elias VanDyne, another One, and all her carefully crafted plans fly out the window. Literally. When the two of them touch, their Ones combine to make them fly, and when they’re not soaring over the Nebraska cornfields, they’re busy falling for each other. Merrin’s over the moon - Elias is as good at kissing as he is at helping her fly. Better yet, her mad chemistry skills land her a spot on the Hub’s internship short list.

But when the Hub kidnaps Elias, Merrin discovers The Hub’s sick experiments could take away even their measly single powers - Fisk’s interest in Ones like them might even be lethal. If she stands up to Fisk, she not only risks Elias’s life, she’ll also destroy her chances of ever finding a way to fly solo – of ever being more than a One.

Here's why I liked ONE:

~I love Merrin. She's hard-core. She's angry. She's independent. She's typical. She's unique. She's freaking brilliant.
~I love Elias. He's just so.... cute. And sweet. And smart. A loyal and devoted friend and brother.
~There are characters I loved to hate and wanted to smack in the face. Scenes that left me sighing. And wishing I was a ONE too.

Here's why I loved ONE:
The climax is exciting. The characters are real. They care about each other. They have flaws, but they grow and learn.
And the love scenes are just... *sigh*

Another reason I loved this book:
Young Adult fiction nowadays, IMHO, is going down the toilet. Books meant for teenagers are full of sex. Some argue that this is a "reality" for teenagers nowadays. Bull crap.
I can tell you right now that it's not a reality for lots of teenagers. I wasn't sleeping around, that's for dang sure. And as a married woman, I don't want to read about it. Not in detail. No Fifty Shades of Gray in my house. Ever.
Call me an old-fashioned fuddy-duddy, but this is how I feel and I think there are lots of moms that would agree with me.
So then we have Merrin: strong and determined. She falls in love. Yes--in love. Normally I don't buy the whole teenage I-can't-live-without-him "love" (even though I was a huge sap for it when I was a teenager), but this time it worked. I bought it.
So when things start "heating up" between Merrin and her romantic double, she finds herself uncomfortable. This, in my opinion, is the reality. What a REAL teenage girl would think and feel in this situation.
But it gets better.
Merrin voices her discomfort. *high five!* She doesn't just go along with it in fear that her boy will drop her like a hot tamale. She speaks up. And what happens? Her boy respects her enough to control himself and step back. Restraint. I loved it.
Not to say they didn't want each other. Well, duh. That's a reality for sure. But they exercise restraint.

There is some swearing in the book, just to warn you in case you're sensitive about that kind of thing, but it's about a PG level and fits with Merrin's personality. I wasn't bothered.

Available June 11th.
written and directed by Amy at 6:06 PM

Could be some good summer time reading! Thanks for the review! Still looking for your book (s) to be on the shelf!! :)

Where are you? Just stopped in to check all is well...and April? I hope you're just having time fly by with the awesomeness that is summer!
~R