I've got a dream

So, chaps, I'm going back to school. Hooray!
I'm still a few classes off from getting my associates... yeah, MAJOR slacker over here. I regret not taking more classes (yes, Mom, I'll admit you were right) back before I worked full time and my parents or federal grants were paying for my education.

Back then, all I cared about was being on my parent's insurance. So I just took classes that caught my eye and fit my schedule. Things like ceramics, music appreciation, and of course creative writing. I did do some serious ones, like psychology, history, and English, but mostly I just goofed off.
So now I'm starting again, with a lot of classes under my belt but a bunch of yuckies still to do. Like math *SHUDDER*and a couple sciences.
But I tested out of reading!! I took the test today and scored a 111 out of 116. A 92 would have passed me out of reading. I did it! I wore my ladybug locket and charm bracelet for good luck. *smiley face*

We'd had a discussion on what I want to do with my life.
Here's the answer:

Be a mom.
and yes, I do still want to be an author, of course.

But when I'm at a point where my kids are old enough, I'm going to finish my education.
One day, with a PhD in British History and Literature.
And with that degree, be a college professor. And with that paycheck, buy a house.

I'd like to wake up with a crossword
In London, York, or Oxford.
By neighbors who use words like cheers and blimey.
In a country cottage pretty
Or a flat down in the city
To visit once a year or more or many.
I got a dream! I got a dream!
I'd just love to see an English sunset gleam.
And as every year goes by
I'll get it done instead of try
Because, my barmy chums, I've got a dream.

Anyone ever seen Tangled? If not, nevermind.
written and directed by Amy at 1:59 PM 9 comments:

I gave a similar post last year. But my friend Leigh is documenting her trip to Africa on her blog in a similar way. So I thought I'd be a copycat.

Then I read the journal entry I wrote five years ago today. It was really stupid. So I'll just say it differently.

Five years ago today, I was in England. First, we went to a place called Beale's Park and ate lunch. Larry Ivy, (last name sound familiar, heroes?) our tour guide, told us a story about a game a grandmother taught her grandson: imagining he was a bird and being able to soar high overhead, feel the wind, experience the thrill, see the world, all through his imagination. Larry's hope was that we would be able to do the same. See the world, feel the rush, experience the thrill of being in a new world and creating a place for that world in our hearts.
"Did you play the game?" The grandmother asked.
"I did, Grandma. And it was wonderful."

Did I play the game?
You bet your left big toe I did. Only it was real. And it was wonderful.

Pics of Beale's Park.
Doesn't do it justice. 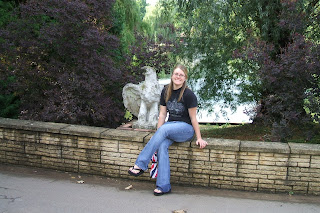 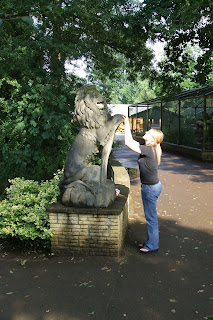 LOTS of refashioning, crafting, spray-painting, and picture hanging!
I've got more pictures to show, but to start with, here's a tutorial.

You know those lovely canvas/wood pictures with the witty phrases, Parisian cities, and/or other assorted wording on them?

I decided to save money and make my own. Plus, I got to customize it!

Step One:
Make a design for your canvas using lots of different fonts. I chose to do cities in the world: ones we've been to and ones we'd like to visit. Here's my mock-up: 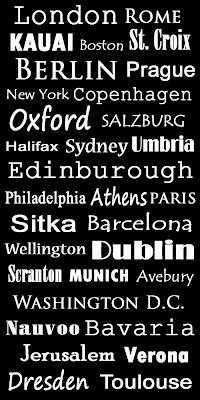 Step 2: Print out the words the exact size you want them on the canvas. Using photoshop is a HUGE help because you can get the proportions right.

Step 3: Tape carbon paper beneath the printout. Make sure every layer is securely taped! You don't want the print out to move on you. It will make life very hard. 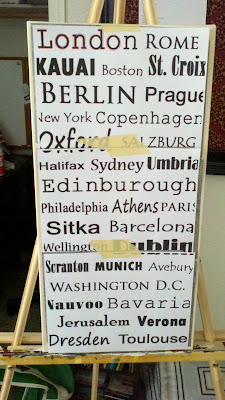 Step 4: Using moderate pressure, trace around the letters using a colored pen so you can see where you've traced. Make sure you don't forget to trace the inside of letters too! (I kept forgetting the inside of the letter a). 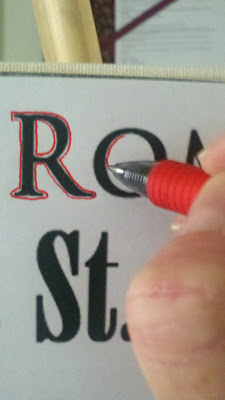 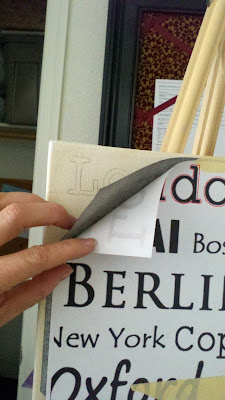 You can see how it looks traced.

Step 5: Double check you have everything traced before you remove the paper. Here's the canvas before I started painting. 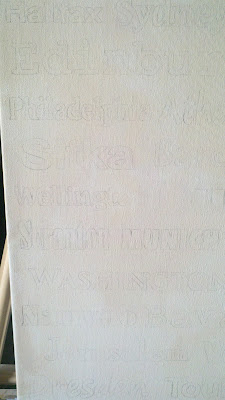 Step 6: using a SMALL paint brush, fill in around the traced letters with black paint. This is where the patience part comes in. A lot more detail than I first thought. 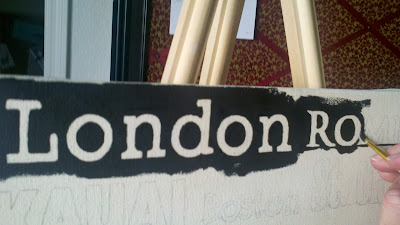 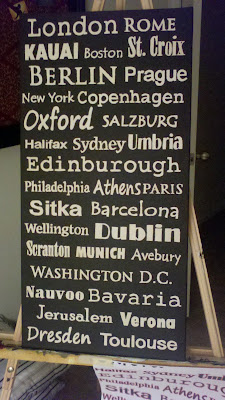 All I have to do now is hang it on the wall! When that is accomplished, I'll post pics.


And cuz I know you'll ask, the cities that either myself or Bret have been to are London, Berlin, Oxford, Avebury, and Dresden.
written and directed by Amy at 8:28 PM 6 comments:

I'm a huge Harry Potter fan.
I was sad I didn't see it at midnight.
But me and the Man went and saw it today.
I cried three times.


The film was amazing. Wonderful. A brilliant ending to a brilliant cinematic attempt at capturing such a well-beloved story.
With minimal disappointment as far as missing one or two of my favorite lines.


In honor of the triumph, I'm posting a short story I wrote a few years ago. It's what we call a Harry Potter fan-fiction. I like to write stories about the wizards of Harry Potter from the point of view of "muggles" who may have come into contact with them.


And since Chapterhouse Lane is booked up with The Streets of Elangard no pun intended I thought I'd post the story here. Hope you enjoy.

They say once you go Mac, you don't go back.
I wonder if that has anything to do with iMovie.
And all its serious fun-ness.
I made a trailer, yes a TRAILER aka preview, of our recent family vacation.
I defy you not to laugh.
Meanwhile, as this thing uploads, I'm going to go peruse pinterest.
wow, that didn't take very long.
Enjoy!
written and directed by Amy at 1:28 PM 9 comments:

I'm on vacation right now too, so you won't be able to hear from me for this next week. But I'll post about it when I get home.
In the mean time, Chapterhouse Lane is still being regularly updated (hooray for post-dating!!) so drop on in if you're so inclined. Tanks.
written and directed by Amy at 8:36 AM 2 comments:

Amy from Sunshine on my Mind!

All the way in AUSTRALIA!! Yay, go Aussies!

Her blog is always so positive and fascinating, since she's going through winter right now while "I'm baking like a toasted cheeser. It's so hot here!" in the summer.

Thank you everyone who participated, spread the word, and were such a huge support to me as I launched my story blog. I call you my heroes on Chapterhouse Lane and that is truly what you are!

I love you guys. Really. Thank you so much.

When The Streets of Elangard is done, I'll have another giveaway when the next story, Fathom, is launched.

Amy, make sure you send me your address on an email, along with your favorite treat, unless of course you want the gummy "bookworms". :)
written and directed by Amy at 2:56 PM 3 comments: