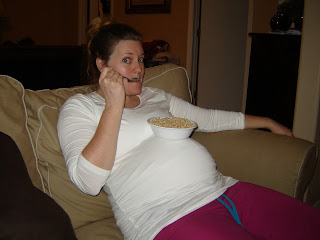 Here's me relaxing after a loooooooooooooooo(breath)ooooooooooooooong day at work. Eating my favorite, favorite food: cereal. The Man thought it was cute that my belly can now double as a table so he wanted to take a picture.
written and directed by Amy at 5:53 AM 6 comments:

I'm sorry, I gotta do this again

Another contest.
Right I know. I'm pathetic.
But I can't help it.
I just gotta have some glitter toes.

Emily Yeager is the perpetrator.
Hop on over and check her out here.
I hope she doesn't mind me putting a small excerpt from her blog for a quick explanation on glitter toes:

Glitter Toes are a gel application that takes
about 20 min to do and last for 6-8+ weeks
depending on how fast your toes grow. They are instantly
dry when we are done and are thinner than acrylic toes.
You get your cuticles all cleaned upand toes shaped in the process.
They come in a collection of color's that you choose
and are only $20. Age 12 and under are $15
If you host a party of 6 or more, you get yours for free!
﻿Cool? You betcha.
Am I a sucker for giveaways?
Sigh.
I guess this is what I get for being up at an unholy hour cruising blogs.
written and directed by Amy at 5:44 AM 3 comments:

I gotta get me some of these!

I'm entering a giveaway. I'm a total sucker for free stuff. Call it a curse.
But oh, I HAVE to have the red one because my baby's bloggy nickname is Ladybug!
The giveaway is at http://www.trying2staycalm.com/. Hope I get it! Hope, hope hope. 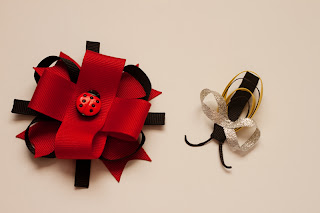 I am a Christian, thank you very much

With all the political mud-slinging and social unrest going on, sometimes religion gets mixed up with it too.
I was reading in Time or Newsweek or something (can't remember which. We get both at my office) and there was an article about Glenn Beck and his rally about returning to honor.
This rally had nothing to do with politics or religion.
And yet there was a comment in the article from a religious leader who said he "still" didn't believe Mormons were Christians.
Um, excuse me?
I don't mean to sound angry or antagonistic, but every time someone tries to tell me what I do or don't believe, I get a little...
ticked off.
Especially when it has to do with something as sacred as my belief in Christ.
I am a Christian.
Jesus Christ is my Savior.
My Brother.
My Confidante.
My Advocate.
My Teacher.
My greatest Friend.
and so many other things.
What right does anyone have to say that the members of the Church of Jesus Christ of Latter Day Saints don't believe in Christ as their Redeemer?
It would be like telling me I don't believe in my love for my earthly family.
Or in my devotion to my unborn child.
Or that my heart is beating.
I know most, if not all of you who read this blog are Christians as well, so I'm likely preaching to the choir.
But that's fine. I'll say this anyway.
Bottom line?
I believe in God as my Father. I believe in Jesus Christ, his Son, as my Savior. I believe in the Holy Spirit as my constant companion.
And I will strive every day to be more like Christ.
So to those who may still doubt where this "Mormon" girl's loyalties lie? Don't ever, ever insult me by trying to tell me I am not a Christian.
written and directed by Amy at 7:16 AM 7 comments:

I saw this on Jackie's blog and thought I'd spread the word.
At House of Sarager, it's Impact Week, which is basically a series of uplifting stories and ways we have had a good impact on others or how others have had a good impact on us.
So I thought it'd be fun to join in. We can all use a little dose of happy once in a while, right?
So here's my Impact Week story:
I was trying to think of someone who left a good impression, made my day, changed my life, etc. Well, honestly the list goes on and on. I couldn't just pick one person who has made my life a little bit more sunshine-y.
Then I read my friend Lisa's blog, where she mentioned that she had taken up indexing for FamilySearch.com.
Indexing is basically data-entry; you take the information from a scanned photocopy of a census record, enlistment card, etc. and enter the person's information into the Family Search website. The information becomes available online to anyone who is interested in looking up their family history/genealogy.
Since we had just been challenged in recent church meetings to help out with this tremendous effort, I thought... today's as good a day as any.
So I signed up!
It was hard at first. I didn't realize you were supposed to select only languages you could understand. I thought I could handle the Spanish, but I couldn't. Then I got a record with penmanship so terrible I couldn't tell for sure if the person's name was Clarence or that he had a sister named Millie... Minnie? Mollie?
Oh boy. What'd I get myself into?
But once I got the hang of it (and sent back the illegible census record for the more experienced indexers to handle) it was really fun! My goal was 10 names. I got 33 done. And I want to do more! Once you get going, it's so easy and one batch of 30 names takes probably 30 minutes.
Like those card commercials say: it's the biggest little thing you can do.
It's so awesome. I feel great knowing that even my small efforts are helping with a greater work. And I know that blessings will come to those who participate!
It's a little thing, I know. But it had a big impact on me.

written and directed by Amy at 6:14 AM 6 comments:

I go walking with my Mom on Friday mornings when the weather cools off. I look forward to these walks and love the time with Mom, who is also one of my dearest of friends. And you just can't beat a good walk with the temperatures going delightfully downward (remember Arizona heat=disgustingness). Plus I need the exercise. Amycakes is getting laaaaarrrrrggeeeeerr. (25 weeks down! Sorry I don't have a picture. I'll post one soon.)

So we're walking down the street, enjoying the beautiful 69-70 ish degrees and we pass a yard sale.
With baby stuff.

Ahh! they have a high chair. And a jogging stroller. And a bouncer. And a high quality paper-cutter (okay that's not a baby item but it was something I've been wanting). And a basket Mom loved. And some really cool zebra-print luggage. And a shelf that I would love to use in my little Ladybug's bedroom. And baby clothes!!

This place was a GOLD MINE!!!
I felt like those guys on that show American Pickers. We kept finding great stuff.

Well, I didn't get the luggage, or the bouncer, or the shelf. Or the paper cutter. She wanted too much money for it.

But Mom got her basket.
And here's what I DID get: 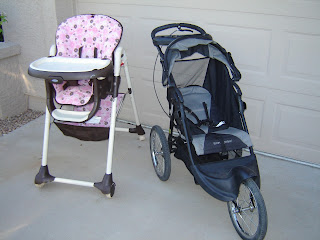 Guess how much I paid?
$70
for both.
Yeah. Totally scored! I wasn't nuts about the high chair being pink... what if I have a baby boy someday?... but who cares. At this price, I sure as sugar won't be complaining! Both are almost brand-new. They could use a good hose-down, which I'll do tomorrow, and one of the tires on the stroller is a little low. But again... who cares?
Can't wait to use these babies! My little Ladybug is excited too. She's just squirming and dancing and kicking and punching and rolling with anticipation. Mostly at three a.m.
Tomorrow is Saturday... more garage sales? Ooooh, yes, let's!
written and directed by Amy at 8:14 PM 5 comments:

Thanks for the responses to my last post. Writers are like the ahem "ladies." We need all the "support" we can get.

First of all I need to let you down easy by telling you I won't be posting more of the story. I intend to publish this one day in book form and putting too much on the internet sort-of counts as already having "published" it. I think potential publishing companies may frown on that.
I don't know if it will ever get picked up by a publisher, but who knows? Greater miracles have happened in the past.

But I will tell you this much, just so you don't feel like you've been totally ripped off. And because I'm horrible at keeping secrets when it comes to my stories.

The voice Ellie heard singing was, of course, this story's equivalent of a "phantom." He's not a disfigured, evil dude with major mirror issues who is twice her age. Remember, I'm giving this story my own unique, modern twist. There will be some differences, but also some similarities: He won't be twice her age.
He will of course, have his issues and a past. He will be mysterious, a genius, have little conscience, and crave the darkness more than the day. But he won't be a gross old man. (Ever compared the stage phantom to the cinematic phantom? Umm... hellooooo Gerard Butler!)

The person who surprised Ellie in the middle of the impromptu performance is this story's "Madame Giry." She's a teacher at the school and similar to the original tale, she's somewhat privy to the "phantom's" comings and goings. Her name is Mrs. Leroux. The name gives tribute to the story's original author, Gaston Leroux.

Who, incidentally, shares my same birthday. :)

This weekend will be busy. A doctor's appointment, a white coat ceremony at the Man's dental school, then of course General Conference tomorrow (and on Sunday, but I never write on Sunday anyway so that doesn't count). Hopefully I'll be able to find the time to work on the story some more so we can get it finished and submitted asap.

Thanks again for the encouragement, guys!
written and directed by Amy at 5:56 AM 2 comments: