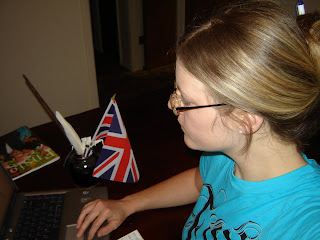 old picture. very old and very posed but it's of me writing so it works.
Okay folks, I'm going to go out on a bit of a limb here. I'm not averse to sharing my writing with people--not by a long shot. But for some reason, I'm a little shy about this one.

Earlier this year, I decided I wanted to do a modern re-write of Phantom of the Opera. Yeah, I know... like we need another "retelling" in this world of remakes.  Hawaii 5-O? seriously? But I liked this idea. And so did my friend Marie T who is the most gifted proofreader I've ever met... at least the most gifted unbiased proofreader I've ever met.

So I decided to work on this untitled piece today. I'd like to share a little snippet with you. If you have any constructive criticism, I appreciate it. Just don't tell me it stinks worse than Arizona armpits. Please.
Let me give you a bit of background first: Our main character is 17-year-old Ellie. Her mom died when she was two and her dad died just weeks before the beginning of the story. In his will, he left money and a wish for Ellie to attend the prestigious Eastmond Academy boarding school after he was gone. This excerpt takes place the night Ellie was brought to the school. The semester hasn't started yet, so she hasn't seen any other students.
Okay.... here we go.

What time was it? Early or late? I didn’t have a watch. Even if it was close enough to dawn to get up, what was I going to do? I didn’t know where anything was, not even the bathroom… a detail that my body was beginning to remind me.
Maybe I could go back to sleep. I put the picture of my parents on my night stand and lied down looking at it. But the growing gnaw in my bladder refused to let me relax. There had to be a bathroom somewhere in this infernal place.
I got out of bed and tip-toed to the door. Peeking out into the hallway, I was again greeted by the spooky, claustrophobic hallway softly lit by dim night-lights. The hallway was deserted, the silence sleepy and absolute.
Should I start opening doors until I found one with a toilet? It was worth a try. I doubted any other students were here yet. I tried the knob on room 16B. It was locked. Down the hall I continued, attempting locked doors and biting my lower lip. The first door at the entrance to the west wing didn’t have numbers on it. Maybe this was the one. I reached for the handle, but paused.
At first I thought I was imagining things. I had to be… it was the middle of the night. Wasn’t it? I suppose it could have been early in the morning… I took a step closer to the hallway leading to the stairwell in my stocking feet and listened harder. The sound became unmistakable.
Singing. A soft voice… tenor if my guess was right. Like my dad. But more beautiful; like someone had taken his voice and added brown sugar. I didn’t know the song. The words were too far away to be perceptible. The unfamiliar tune was rich and melancholy. It sounded like a melody my heart would make drifting around the cold corridors of Eastmond Academy. I couldn’t imagine why anyone would be singing at this time of night; perhaps one of the gifted students who was getting in some early rehearsal time. But I continued to listen, my steps taking me closer to the stairwell to hear it better.
I ran my hand along the banister of the landing. There were no more stairs going up, but the voice was coming from above. I stared at the ceiling as I moved along the landing, all need for the restroom forgotten. I didn’t know who was singing and I couldn’t seem to figure out where they were. All I wanted was to keep listening.
Just as I was about to sink to the floor to sit and soak up the sound of the voice, I heard a door close. I gasped, jolted out of the sweet, dream-like peace I had been wandering in.

That's all I'm going to share today. I hope you like it. I hope it's not too weird or cheesy. Or dumb.
Who was the voice Ellie heard? Who was the person that interrupted this nocturnal excursion?
You'll have to wonder.

written and directed by Amy at 4:16 PM

YAY!
I need to come visit you sometime, and weed some more of this story out of our dear friend Hero London.

Yikes I hope she didn't pee her pants!

Nicely done! I would love to read more, You should post a chapter a day. Hurry though, I'm hanging on!!

Yep! I'd definitely read it. Hurry and write it so I can know the whole story!! :)

I want to keep reading and find out more!

Very nice! One little grammar and imagery issue. Past tense of "lie" is "lay," unless you're talking about a fib. So it should be "I lay down" instead of "I lied down." And "gnaw" is usually associated with the stomach rather than the bladder, in which case I'd probably use something like "pressure." Anyway, I'm intrigued, and certainly wouldn't mind reading more. So feel free to impart more of your words to us! :)

(And if Kadence is still around, I kinda miss that girl!) ;)

Yes - love it. Would you publish it already so that I can read the rest :)

Do I get to read the early manuscript? Sisters privilege right?

Very nice. MUCH improved from what I remember of your original. A couple things to really set it off:

2) Do NOT use West Wing. Either change which side or call it something else. Either the TV show or Beauty and the Beast are the first things that come to mind.

3) She's still an orphan right? Let's do a little more emotion with her laying with the picture. Tracing the figures with her finger tip, emotion, the focus on her father, etc... let's introduce that fact here. THEN connect it to the voice she hears. That lone voice... her father alone in the cold earth... her alone in the world. "The voice rang, lonely and desolate, striking a part of my heart nothing else had touched since my father's funeral"... I mean, that's a bit dramatic, but USE it.

Really great start! And I AM getting to the rest of that manuscript. I'm SO sorry. I try to get going again and I get bogged down with other things (plus, I try to go back and remember where I was. I will finish though!)

And I just realized I have the longest comment! Sorry!