I was giddy.
Because I was going to go on my first date with this man: 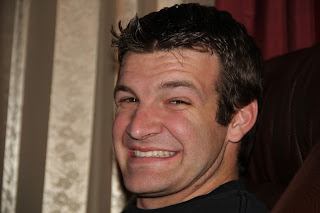 
My sister told the story of how she and the love of her life met and started dating. I was so enthralled by her story that I just had to copy her and write about my own experience with finding "the one."

It was a dark and stormy night...

Just kidding. It was a lovely night around August/September of 2005 (incidentally, the aforementioned sister was engaged at the time). I went to a fireside at the Red Mountain Institute. For those who don't know, a fireside is a big gathering of members of my church who come to listen to a speaker for motivational or spiritual purposes. After it was over, while enjoying refreshments of brownie sundaes or cookies and milk, I saw this really cute guy across the room. Being the habitual flirt I was, I made quick calculations on how to approach the young man who was so nice to look at.
Aha! He's standing with one of my male friends, Joe.

A great way to meet a guy: know his wing-man.
So I approach. Say hello to Joe. Ask name of Joe's cute friend and introduce myself. Shake hands. Admire smile of cute friend and mentally test how his last name sounds with my first name. Give my subtle, yet brilliant and well-practiced methods of flirtation.
Well... at the time it felt like my womanly wiles were not going to work on this guy. He was a bit standoffish, not very talkative, and seemed indifferent. Oh well. It's not like that's never happened to me before. I was 23 years old and unmarried. In the Mormon culture, that's like 39.
So on to the next adventure.
A few weeks go by and Joe passes me in the hall at church. "Hey, my friend might call you." He told me who his friend was, but in the passage of time, I had forgotten all about his cute friend, who had apparently gotten my phone number from Joe.
Who? I wondered after hearing the name.
Ah, no matter. The name sounded handsome at any rate. And I was a trusting sort of gal.
The call never came. Life went on.
A new semester. January, 2006. At the same institute building a place where my church teaches classes of a religious nature for college students, as well as hosting activities and dances, I took class every Tuesday, Wednesday, and Thursday. Tuesday and Wednesday night were ballroom team nights. Thursday was a regular, sit-down class.
And in that class was that cute guy I met at the fireside all those months ago.
Did I remember him? Yes. Did he remember me? You bet.
Did he ask me out? No.
Not until the end of February. It took several weeks of classes, socializing after classes, and trying to impress him by making him think I was athletic by participating in shooting hoops on the basketball court at the institute building.
Then, on that Thursday night, February 23rd, he approached me and said:
"I got a question for ya. What're you doing Saturday night?"
Me: (mentally) Psh. Going out with you, of course! Oh heck yes.
Me: (out loud) "Um... I don't think I have anything set in stone."
I don't remember what was said after that. Probably because I was so excited to go out with him. My grandma had just passed away and I was eager for some happiness to come around.
And it did.
Next time: the first date.
written and directed by Amy at 7:48 AM

i love hearing about how people met.

amazing story and i agree with (kassi jane) its intreguing

What a great story, I was chuckling as I was reading it!! I'm glad it worked out for you, as you both make an adorable couple!!

You are a gem. Hilarious and fun. Let's hang out. :)Seriously, when are you moving out here?

Hahaha! Can't wait to hear the next installment.

Wondered all the time whom your huby (is that written correctly?) looks like.

Found out today: He truly could be a brother of Colin Firth!

Looking forward to your story!

super exciting! I love you said "nothing set in stone." That's so much better than making him think that you had absolutely nothing planned (even if you didn't) because then you are so very nice for making room for him in your life.

I'm super excited to hear more. My favorite parts are where you are actually telling us your honest thoughts, but being so cool and collected to actually SAY them intelligently!! :) You make me laugh!! Keep it up!!