So... our first date

was interesting.
As it turned out, I did have something planned for the night the guy who would become my husband asked me out.
It was my friend's birthday party.
a masquerade.
yep.
Me and a couple of the girls, including the birthday girl, got together to decorate our masks for the event. I told them, "I have to leave early because I have a date."
"Bring him!" they said.
Me: "Uh... I don't know if it's really his thing, but I'll ask him."
I asked him. He said he'd go.
Another thing you need to know about me: I love dressing up. Halloween, Renaissance Festival, my friend's masquerade party... yeah. I'm so game. My husband is the exact opposite. His idea of a Halloween costume is... well... nothing at all. I mean, just regular clothes.
He wouldn't be caught dead in a costume. That is, except when he was trying to impress a girl. Me.
He came with me to the masquerade in a white button-up shirt and black dress pants and a Phantom of the Opera mask. This was all on my suggestion. The mask was kind of cheap-o and kept digging into his face.
Poor guy. The things we do for love.
So we go to the masquerade party. I'm all decked out in this: 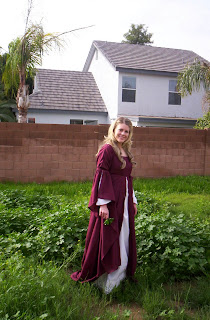 Funny story... even though my hair is this long now, in the picture, the hair is fake.
The party. Ah, the party. 100% super awkward. Made worse when my outspoken friend told us to go dance. This is our first date, we barely know each other, we're weird as it is because of our costumes, and my date hasn't slow danced with a girl since before his days teaching the gospel in Germany.
It could have been a disaster had it not been for racket ball.
After the dancing, a little mingling, and  more awkward!, we changed clothes and went to play racket ball.
I'm not athletic. I wasn't looking forward to playing a sport, even though I pretended I was. We girls know how to fake it when we're not enthused about the planned activity... especially when we REALLY like the guy.
We played racket ball. I lost. By a lot. But I had a blast.
I had so much fun just hitting the ball around and talking to my date and laughing and figuring out how much we had in common.
We went to Sonic for shakes after racket ball and stayed out till 2 a.m. talking.
And I knew... not that I was going to marry the guy... but I knew that there was something special about him. I had a great time just being there. It didn't matter what we were doing, whether it was feeling ridiculous at a masquerade party or deciding to quit keeping score at racket ball.
Would he ask me out again?
Part three in the next post.
written and directed by Amy at 7:12 AM

Oh this is so much fun!! Your hubby and mine have the whole non dressing up thing in common, but he'll do it for me if push comes to shove HA!

Too funny, I can not picture him with a phantom mask on, Oh how I wish you had a picture of that. What great blackmail material for an older sister.

1. LOVE the new blog layout.
2. I never knew about his costume at that party! Can't wait to hear the rest!

what the what! BRET DRESSED UP?! I had to pick my jaw off the floor....WHat men do to impress girls suddenly stops when you walk out of the temple doors ;) P.s. love the new blog. it is BEAUUUUItful :)

This is my second time trying to post a comment (my internet connection is being very annoying). The new layout is A to the AWESOME. I'm really enjoying the pre-marriage posts. So fun! Thanks for the book suggestions. I'm excited to go to the library now. And I just LOVE Ella Enchanted (and all of Levine's other books for that matter)!