Ugh that is such a not-creative title.
Feeling not creative right now.
Creative posts titles suffer when I'm not feeling creative.
And don't even get me started on my book writing.
It's a joke.
Anyway...
For book club this month, we're reading this: 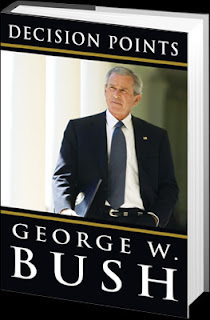 source
I don't normally read nonfiction (except for church publications). This is a stretch for me. But a good one.
I'm not very far into the book, but it definitely gives me a new perspective on the man that used to be our President.
My conclusion so far...
He is truly a great man.
He discusses his faults as well as his triumphs.
He doesn't gloss over his mistakes or even make excuses for them. He's open about his imperfections.
He doesn't gloat over who he rubbed shoulders with... just tells the story of how the people he knew shaped his life and decisions.
He has a cute sense of humor.
He adores his wife, dotes on his daughters, and idolizes his parents, who are also great people.
He's got class.
He is a God-fearing man. A man of faith and prayer.
He wanted to make a difference. He wanted to do good. He wanted to change America for the better. So he ran for President.
I've gotten all this after only a few chapters. Even though he may have made mistakes, he did the best he knew how.
I like this guy. He's the type of guy you could have a barbecue and an IBC rootbeer with, yet ran the world for eight years.
I sincerely hope that the current leaders of our country realize who they are: servants to the people, responsible to uphold the values of this country...
not royal celebrities bearing down a heavy thumb of control on a mindless populace.
Boy am I glad I'm allowed to say that.
written and directed by Amy at 8:53 PM

Hmmm..I probably never would have picked the book up had you not written this. My interest is piqued;)

Awesome blog post about a great man. He has kinda gotten shafted by the public I think and I'm also enjoying his book. I'm still working my way through it because I've had other distractions. ;)

He really is a great man. Lance is loving this book too, maybe I should give it a chance (I also don't really read books like this too.)

I'm glad you're allowed to say it too! May it continue to ever be so!

Well, I stay far, FAR away from politics, mostly because I tend to see people as people, even if they are presidents or kings. Just human. They make mistakes too, but the problem is they are censured so harshly for them. It's not fair, and I don't like it, so I'm glad to see you're enjoying a book by one of the most unpopular men alive. It's nice to know that at heart, he's a loving family man. I mean, that's the most important thing. Because good citizens start in a good home, I think. :)

Oooh...interested now! I never read nonfiction, but you have intrigued me. :)

:) I am not sure that I will read this...although we chatted about it and had a very good conversation. Proud to be an American. :)

It always amazes me when people call this moronic liar and war-mongerer a 'great man.' It's totally beyond my comprehension.

But, apart from this, you've created a very lovely blog.