These were so yum.
And since they were experimental, I had to bring out the camera.

So here's what we used:

Cabbage
Potatoes, cut into bite-size pieces (one medium potato per person. We actually had more but it turned out to be too much)
Carrots, thickly sliced (two med. or one large per person)
Frozen peas
Hamburger patty
Cream of mushroom soup
Salt and Pepper
Tin Foil
Grill

And here's what we did:

First, to make sure the potatoes would cook all the way through, we cut them up, drizzled them with olive oil, salt and peppered them, then let them bake at 350 degrees for 10 minutes. They're not cooked all the way through, but they'll finish in the tin foil packet.
We also cut them a little too big (about 1-1 1/2" cubes) so cut yours smaller.

Then get a large sheet of tin foil.
Arrange a few cabbage leaves like a bowl. 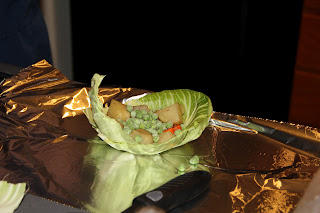 Sprinkle in some carrots, peas, and potatoes (you'll be layering these, so don't use all of it.)
Spoon a little cream of mushroom soup over the veggies. 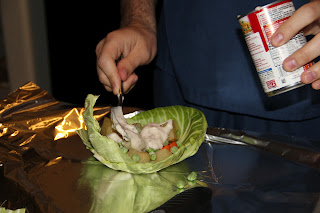 Put the hamburger patty on top of that (salt and pepper the patty). I think next time I'd like to mix a little Worcestershire sauce with the beef, something to give it a little more flavor. 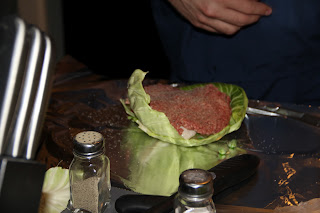 Slop a little more cream of mushroom over the hamburger patty, then sprinkle on the rest of the veggies. (We made one packet for each of us, but there was a ton of food so you could easily do one packet for two children.) 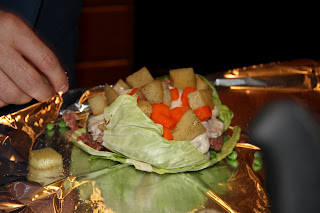 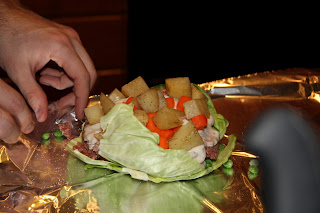 Cover it all up with more cabbage leaves. 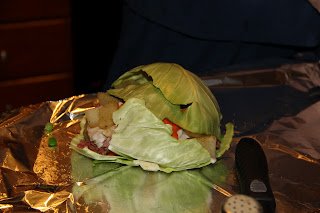 Fold the tin foil around the food, pinching off the ends well. Then place the packet, seam side down, on another piece of tin foil and wrap that up too. 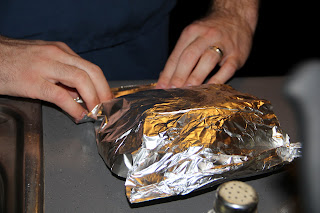 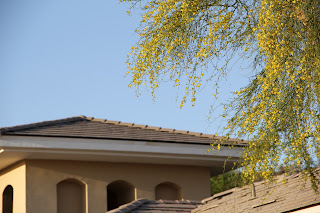 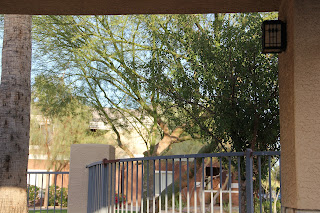 We heated the grill up to probably medium-high. Bret doesn't remember how hot it was. We placed the packets on the grill and let them cook for 20 minutes per side. The cabbage burned a little (and the cabbage is our favorite part!) so we'd probably cut it down to 15 minutes a side.
The rest of the food was peeeerrrrrrfect.

Turned out so scrumptious!! 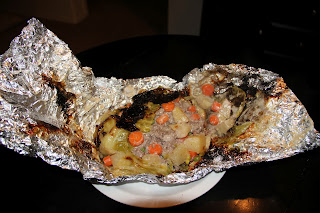 Tin Foil Dinners... not just for camping anymore.
Mmm, I want to do it again!
written and directed by Amy at 7:32 AM

Is there a way to legally do this without a grill? I wanna try!

Gotta love tin foil dinners! I tried one with chicken, rice, and broccoli once. De-lish! I haven't ever tried it with cabbage... might have to give it a go next time!

I did it! We did zuchinni (sp?), frozen veggies, stewing beef, and chopped onions. Just doing it in the oven, the temp has to be WAY high. We tried it at 350, 20 min each side, and it didn't do anything. The meat hadn't even started to cook. So we amped it up to 500 degrees, and did 15 min/10min, and they turned out perfect! I'm eating the leftovers for lunch today :-D

Thanks for the inspiration Ames!

I would have never thought to do the cabbage leaves=--great idea! Hubby will be thrilled with the idea of using cream of mushroom soup. We are constantly arguing about the need for it in our pantry since he thinks we should use it all the time.

Go you for being all experimental! I'm still a bit of a noob in the kitchen so I have to follow a recipe most of the time :P