Bret hates store-bought spaghetti sauce. I like it, especially the chunky mushroom one. But you know how it is ladies... you often hear the words "can you make it like my mom's?" Especially if you're a newly wed or have been married five years or less.
When we eat spaghetti, I have to make it like good old Grandma used to make. Bret's dad was raised on the sauce, and Bret was raised on the sauce. When I first tasted it, I found it nasty. It has since grown on me and I now tolerate it.

But marinara sauce is a different ball game. We use this sauce for making homemade pizza, calzones, or chicken marinara (which is just like spaghetti except with sauteed chicken).

And it's brilliant. We BOTH like it! And the best part? NO SUGAR! A lot of marinara recipes call for sugar, even just a little bit. This stuff doesn't need it. I've adapted the recipe from Ralph's Marinara Sauce via foodnetwork.com. I cut the portions down since there's only two (soon to be three) of us, and added an extra-veggie option if you're so inclined. (I let it slip to Bret that I added grated carrots and red bell peppers to this last batch. He wrinkled his nose, said it made the sauce too chunky, and to skip it next time. Oh well. Maybe I'll try mushrooms next. YUM!)

So here's the recipe: 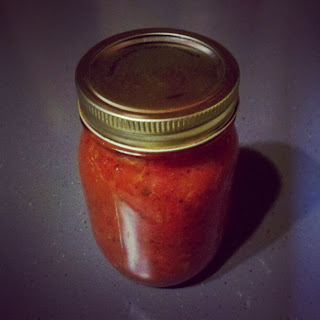 Directions
1. Heat oil on medium
2. Saute onions and garlic (and other veggies, if you added them) in oil until golden brown
3. Add rest of ingredients
4. Bring to a boil, lower heat and simmer 45 mins to an hour.

Makes just over a pint of sauce.
You can easily double or even triple the recipe.

So that's today's Tried and True. It worked for me, hope it works for you!

I always make homemade sauce. Much tastier and easier to hide all the veggies in :)

Oh my you're passing on the family secrets!! Yum!!

I may have to try this sometime. At least for the homemade pizza. I haven't found a sauce that wows me yet, and this one may do it!

Whenever I learn to can things, this is what I'd like to bottle up a bunch of. And I will definitely be putting a TON of veggies in for the two people in my family who don't eat anything healthy unless I spoon feed it to them. ;)