This morning, Bret was making his lunch for school. He does it a little differently. Instead of making an actual sandwich, he puts everything he needs into separate containers (like lettuce, tomato, mustard, mayo, bread, lunch meat, etc.) so he can "make" his sandwich right before he's ready to eat it.
Keeps it from getting soggy, see?
He's kind of a picky eater that way.
So as he's putting it together, I asked him if he was making a ham sandwich.
Conversation. You know.
And he said "Just making the components."
I thought he said "Just making the compona."
As though it was the official name for a ham sandwich or something.
After finding out what he really said and having a small laugh about it, I think we may have to call ham sandwiches componas from now on.

I had to tell that story after first googling compona to make sure it didn't mean something vulgar. Like butt crack in Italian or something.


AND....
I made cinnamon rolls today. For the first time in my life (on my own). I used a recipe I found on pinterest, which is supposedly similar to Cinnabon.
I just tasted one....

and I am in transports of taste-bud delight. It DOES taste like Cinnabon!!! I think I've just invited a little bit of savings and a few extra pounds to my future. 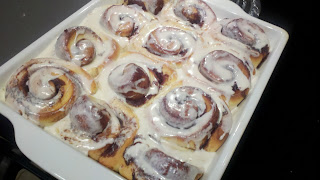 Aren't they pretty??
written and directed by Amy at 10:37 AM

Oh I SO want one of those cinnamon rolls RIGHT NOW! haha I am doing no sweets and that picture is rough!

they are gorgeous and I totally want one. Or three. :) Good job!

I'm laughing at your compona story. I love that you googled it first! and those cinnamon rolls look devine.. you may need to share the recipe!

Love the compona story. I can totally invision the conversation. haha. They look delish & I really like your baking dish too!

ha ha I'm also doing no sweets! Was on a juice fast but that only last about 5 days (wanted to do it for 10)..lost 5 pounds thought (although I'm now not sure how much I gained back.) Been pretty good but been eating a lot of popcorn (almost fat free popcorn that is) But good job those look amazing!

I think I may need that recipe :)

Ha Amy I'm just like your hubby. I hate soggy sandwiches so If I'm packing, no mayo for me, I'll eat it dry.

Your Cinnamon rolls look heavenly I can actually smell them and now my mouth is watering!

Cinnabon? Oooooohhhhh... I sure miss that place.

P.S. You're so nice to always comment on my blog, even if it hasn't been that good lately. :D

I'm coming to visit you the next time you make these!!

So where can I get the recipe because I think I need a cinnamon roll, like, pronto! :) The compona story reminds me of a similar tale. My little sister, who is now 26 but was 5 at the time, was pesting my mom about what she was making for lunch. Mom simply said, "food." Kara totally misheard her, thought she said, "pooda" and go soooooo excited. She ran all over telling the rest of us that we were having, "Pooda for lunch!!!!" We all laughed at her when we figured out what had happened. We still call French bread pizza, Pooda.

Hahaha, we make and separate our "componas" that way, too! And yes, I agree with the above: recipes for the cinnabons are in order. Mmm, that with a mug of hot cocoa sound so delish right now.

Chris is the exact same way with his sandwiches ....but get this he doesn't like to eat lunch meat sandwiches unless they are fresh made. He won't eat them even if I do what Bret does.